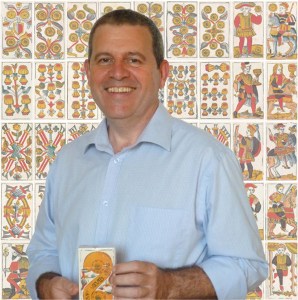 It would be more accurate  to say  « About me » because the editions SIVILIXI amount to one and the same person, at the same time publisher, salesman, accountant, author and store man, in brief, your servant : Patrick Coq.

Fascinated by the so called historic tarots for more than 25 years, I began logically with the study of the tarot of Marseille, editions Grimaud because it was the most well know and – I did not know it at the time – because it contains a part of the inheritance of the old tarots. Then I discovered the edition of the tarot of Viéville of the publishing house Héron-Boechat. I felt that with the Viéville there was a possibility of really understand these strange and fascinating images. So, for more than 30 years I have been interested by the occult and official sciences, with always in the background  the idea of finding elements there which would allow me to understand this mysterious tarot.

A few years ago I finished the first part of my study of the tarot of Viéville and I then started to try  and  find a publisher.   I was already aware  that a study concerning only one single tarot would put off even  the most adventurous of  publishers, but then I discovered that the only edition of the tarot of Viéville was exhausted  and would not be republished!  This discovery plunged me  into a  commercial dilemma: what interest could it have for a publisher  to invest in the publication of a study based  on a tarot, knowing that this tarot would no longer be available ?

Added to this, my essay deciphering an esoteric tarot of the XVIIth century was a little against the current « market trends ».  Instead of offering an express method of valid divination for all the tarots, it proposed to provide elements of understanding with which the reader could form  his own opinion on the meaning of the mysteries of the tarot Viéville , which was not the most well known, far from it.  However it seemed to me to be  the most significant.

In brief, it seemed like a lost cause. I only had two options: put my manuscript away on a shelf of my bookcase or re edit  the tarot of Jacques Viéville, and publish at my own expense my study  » The Mysteries of the tarot of Viéville « . I chose the second option. I wanted to share with tarot enthusiasts and   curious readers  a beautiful reproduction  of the tarot cards , in the correct format, and also to make accessible my  study which, I believe it, is of  interest.  Of course, I have to confess I also wanted to avoid my own regrets in having to throw in the towel !  So I have become a publisher.  It  is a big word for what in reality is a very small publishing house but is nevertheless  an enormous  expense of energy for a dilettante.

So now the introductions have been made. If, dear  visitor,  this small firm is successful  and I am still pursuing my research, why not  continue with the republication of other  magnificent old tarots, such as the tarot Dodal which  deserves  to be available , or the tarot Noblet which is virtually unknown today.

Because, as I hope you will have understood , the master rule of this small publishing house is – as far as possible knowing that we always strive to do our best – the absolute respect of the original so that we can immortalize in the greatest detail these strange images, the Rota, the small World as the reflection of the big World. Enough Philosophy, I will let you discover this site (and particularly the shop to place your order!!).  I invite you to return from time to time because I hope to expand it  regularly by the addition of new pages and,  hopefully, new publications.

PS: please do not hesitate to send  me your remarks and suggestions in the section contact.